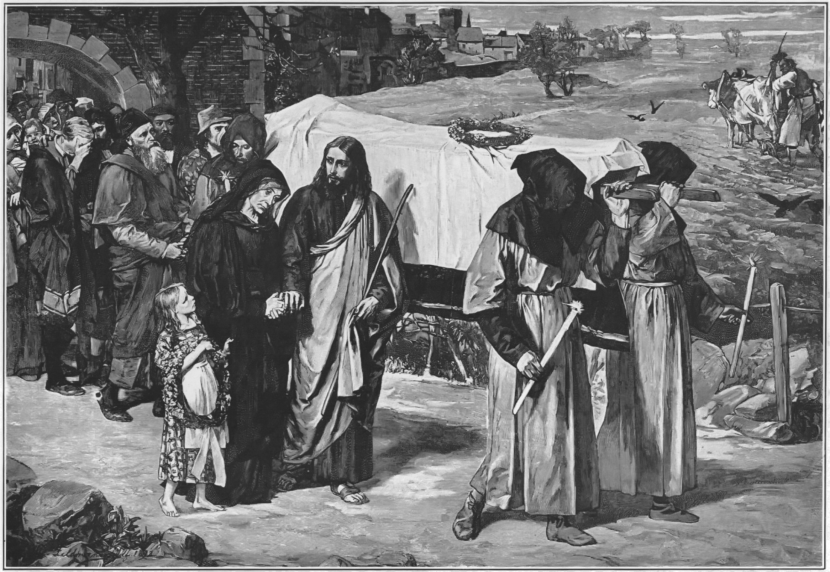 A terrible storm came into a town and local officials sent out an emergency warning that the riverbanks would soon overflow and flood the nearby homes. They ordered everyone in the town to evacuate immediately.

A faithful Christian man heard the warning and decided to stay, saying to himself, “I will trust God and if I am in danger, then God will send a divine miracle to save me.”

The neighbors came by his house and said to him, “We’re leaving and there is room for you in our car, please come with us!” But the man declined. “I have faith that God will save me.”

As the man stood on his porch watching the water rise up the steps, a man in a canoe paddled by and called to him, “Hurry and come into my canoe, the waters are rising quickly!” But the man again said, “No thanks, God will save me.”

The floodwaters rose higher pouring water into his living room and the man had to retreat to the second floor. A police motorboat came by and saw him at the window. “We will come up and rescue you!” they shouted. But the man refused, waving them off saying, “Use your time to save someone else! I have faith that God will save me!”

The flood waters rose higher and higher and the man had to climb up to his rooftop.

A helicopter spotted him and dropped a rope ladder. A rescue officer came down the ladder and pleaded with the man, “Grab my hand and I will pull you up!” But the man STILL refused, folding his arms tightly to his body. “No thank you! God will save me!”

Shortly after, the house broke up and the floodwaters swept the man away and he drowned.

When in Heaven, the man stood before God and asked, “I put all of my faith in You. Why didn’t You come and save me?”

I am sure that many of you may have heard that little story before but it does serve as a good foundation for our readings this morning.  I’m sure that the man spent a lot of time in prayer as the flood waters rose and did his very best to listen for God to tell him how he was going to save him.   The problem was that he was listening for what he wanted to hear.   He wasn’t listening for God to speak to him in unexpected ways.  God did indeed speak but he was not heard.

How good are we at listening for the word of God?   In our Epistle this morning Paul tells his readers about how he heard the will of God and how it changed his life.   A dramatic change – from being a person who persecuted Christians to being an apostle and cornerstone of the early church.    As Paul was walking along that road, no doubt he was thinking about his next scheme, his next plan to try and destroy the church.   I am sure that he was not listening for God voice but he heard him.   What a miracle that was.

I wonder, in our own journeys how do we respond to hearing God’s voice?   When God calls us to do something different, something that is a little bit hard, how do we respond?   Do we say yes, do we try and bargain or do we pretend that we never heard anything in the first place?

In our Old testament reading God called to the prophet Elijah and sent him, with very few details, to Zarephath.   Elijah heard the voice of God and acted on his command.  In the reading we learn of the mother whose son dies.  That mother was a widow, she was the mistress of the house, and now her son was dead.   What little status she had as a woman and a widow was maintained by her son – and now he was dead.   Her voice had been silenced by a society that put no value on her being.  But the prophet Elijah came and gave her voice back by interceding to God on her behalf, and God listened.  And God listened.  Many miracles happened that day.   Restoring a dead person back to life was a miracle but also the fact that the silenced voice of the widowed mother was heard was indeed another miracle.

You may well by now recognize that our first reading and our Gospel today are essentially the same story but with different characters.   Lets go back to our Gospel reading.

Jesus and his band of followers are entering town.  You can imagine it.  I bet it was quite a sight.  People were excited by this man.  We are told that the crowd was large.   The spotlight was on Jesus.  I often like to take myself back to biblical times and to try and imagine what it would have been like to be there.   Sometimes I pretend that I am a reporter for the local newspaper – the Jerusalem Times.  What would I have seen that day?  I would have saw Jesus and this large crowd.  That was the story of the day.  Following this man was newsworthy.   But then ,just as the crowd approaches the city gates a funeral possession emerges.

Out of respect the people in the crowd with Jesus may have lowered their heads and stepped out of the path.  But no one was interested in the widow, the grieving mother.  No one was going to give a thought of what her life would be like now.  No one would feel the depth of her pain of losing her child.  If I were there as a reporter there was no story in the boy’s death, the headline, the story was still Jesus.

But that was not the story that the gospel told.

The mother did not shout out to Jesus, unlike other gospel stories there was no plea to raise the boy from the dead.   The pain that the mother felt, was kept inside.   Her voice was silenced by the events going on around her.   But Jesus heard the silent voice.

He saw her, and had compassion for her.  He reassured her “Do not weep” he said.   Then he transformed that grieving mothers life by returning her son to life.   He gave the now living son back to his mother with unconditional love.   No words of explanation, no list of tasks to be performed.  Jesus heard the silent call, he responded, he acted on the voice that had been silenced.  And that is the miracle of today’s Gospel.

And we are called to follow Christ to live the gospel in our lives today.  Who is the grieving widow in our community?

Gabriel, and I have changed her name for reasons that will become obvious, is a seven year old girl who lives at Dorcas House, Vida Joven in Tijuana – the foster home that we support as a diocese.   Her father is in jail, her mother was addicted to various drugs and her mother’s life spiraled out of control.   With no one to turn to she decided to take her own life and jumped of a bridge whilst holding Gabriel who was little more than a baby at the time.   Gabriel, survived, her mother did not.  After being passed around different agencies she settled at Dorcas House where she now is safe, but without her parents and the lifetime scar of how her life began.  Who will hear the voice of Gabriel’s mum? Or the neighbor down the street addicted to prescribed painkillers?  Who will hear the voice of Gabriel as she grows up and questions the society in which she lives?

Who will hear the voice of the homeless veteran suffering from PTSD?  Or the voice of a 12 year old factory working in India making cloths for our high street stores?

Our Gospel today calls each and every one of us to listen for that voice.   It calls us to do everything that we can to let that silenced voice be heard.

If we open ourselves up to prayer and we listen for God’s prompting then I know we can hear those silenced voices.   But we need to be open to hearing God’s voice in new ways.   We need to be like Christ and look beyond the hustle and bustle of our everyday lives to see those in need around us.

That is what Jesus did for the mourning widow, and there is no better example and guide for us than Jesus Christ our Lord.

My journey - The good, bad and the ugly

The Rev. Mike Angell is rector of The Episcopal Church of the Holy Communion in St. Louis.