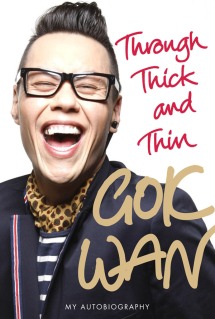 This autobiography is a joy to read, it kept my interest throughout and the last few pages delivered a strong ending.
Kowkhyn Wan, better known as Gok Wan or as Auntie Gok to his TV audience and Bebe to his family is a British TV style and fashion presenter famous for series such as How To Look Good Naked and Gok’s Fashion Fix.  I knew of Gok but actually knew his older brother, Kwok-Lyn, and older sister, Oilen.   We all lived on the same housing estate, Beaumont Leys, in Leicester and all went to the same schools – Barley Croft and Babington Community College.  This of course made it personally a good read as he described his life and school experiences in a place that I know so well.  There is a photo in the book of the family on a playground at the back of the estate.  Recognizing that particular wall of bricks bought back many of my own memories.
The book has so much more to it though for a wider readership.  Gok came from a Chinese/English mixed family, was overweight and gay.  He went on to develop anorexia, a disease that he has, and will continue to battle all of his life.  He is extremely candid about his life challenges.  Examples of this include when he describes the times when he had to give up his life and current education/career in London and return home to Leicester.
At times he glosses over some of his rougher edges, but who can blame him for that?  Despite these omissions what comes across is a guy who has shot into national stardom but never lost his true roots, the importance of family, hard work and helping others.
I’ve always been proud to come from Beaumont Leys, for attending Babington Community College.
And I’m proud of Gok for all that he has achieved.  If I take anything away from the book it is his bravery in allowing, and then writing about, all of his life experiences to shape who he is today.  How many of us would bare all of our dark secrets in public in order to give strength, courage and hope to others?
http://www.amazon.com/dp/0091938384/ref=rdr_ext_sb_ti_hist_1

Mike Angell is a priest and community organizer. He is a preacher, writer, dad, and a sometimes frisbee and ukulele player. He likes to hike, ski, listen, and laugh.