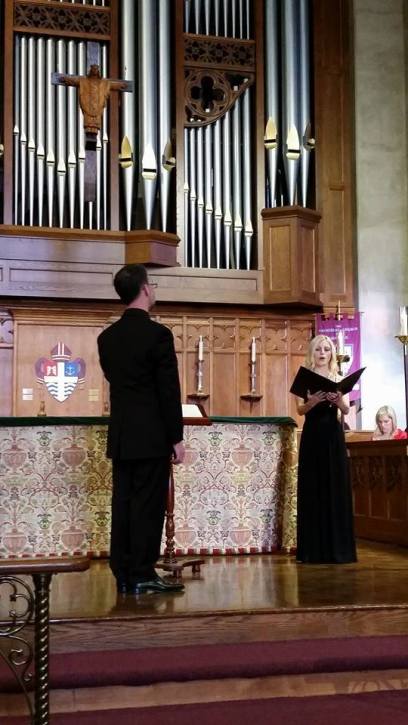 From the photo it looks like the guy in black, is standing listening to a female singer in a rather grand church.  Looks however can be deceiving. The guy in black is actually the extraordinary talented Dr Patrick Walders conducting one of the soloists during Sunday nights performance, by the San Diego State University Chamber Choir, of Gabriel Fauré’s Requiem at St. Paul’s Episcopal Cathedral in San Diego.

Lets be honest, the photo is flat.  All movement and energy has been removed.   You can’t see the energy that the people at the event saw.  You miss the fact that the conductor used his arms, his stance, his facial expressions and much more to help lead the soloist in her performance.   The reality of being in the moment, being in the world was and is much different to what a snapshot could ever portray.

The picture made me think.   In my Christian life and ministry am I an observer or a conductor?   Do I stand by, steadfast in my faith, and watch the world and other people go about their lives all around me?  Or am I a conductor that uses my faith and translates it into action, helping, guiding, teaching, witnessing and most importantly serving?

I hope the later.

My journey - The good, bad and the ugly

The Rev. Mike Angell is rector of The Episcopal Church of the Holy Communion in St. Louis.